Egyptian Blue Lotus is cultivated on a private Organic farm in Egypt, expertly dried indoors under controlled temperature to ensure clean high quality specimens. Most of what is sold today, is Wild-Crafted from dirty smelly stagnant ponds.

The Egyptians worshiped Nymphaea Caerulea because it was viewed as a visionary plant and it was a symbol for the origins of life. When the Pharaoh known as King Tut was entombed, his body was covered in Nymphaea Caerulea (Blue Lotus) flowers.

Blue Lotus is used to produce perfumes since ancient times; it is also used in aromatherapy.

Used in aromatherapy, Nymphaea caerulea is purported to have a “Divine” essence, bringing heightened awareness and tranquility. Some sources cite it as an antispasmodic similar to copal resin.

There are no reviews yet. 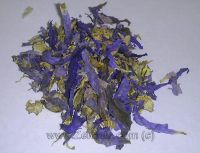